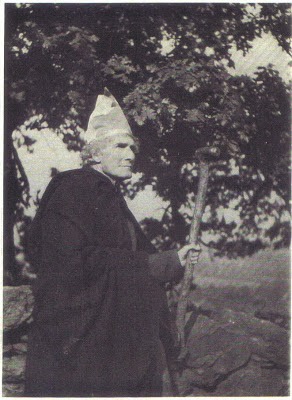 Dressed for a pageant in 1939, Petrushka/ Paracelsus... a proto-druid


"We Aboriginal Welsh People are the proudest people in the world"

The last twenty-eight years of his life, John Cowper - a good deal of a defiant invalid, resorting nervously to his eternal cigarette and often subsisting on such detestable fare as milk and raw duck eggs [to ease his duodenal ulcer] - lived in almost uninterrupted retirement in Wales.

He strove with what stubbornness there was in his fluid make-up to persuade himself he was Welsh! Since the second year of the century he had fallen deeper and deeper under the spell of a race-illusion more harmless than Hitler's but quite as irrational.

However, characteristically, Powys delighted in identifying himself with a conquered race.

In reality his ancestry for many generations had been predominantly English; and the traces for the Celt in his character and disposition are extremely slight. And his long seclusion among the mountains and his intensive study of Cymric cultures resulted in little or no change in his real outlook.

This kind of race-illusion is a sub-species of the life-illusions, or secret fantasy identities, that many - or most people apparently harbour and live-by. The difference (as usual with JCP) is the uninhibited, self-conscious way that Powys wrote about such matters, and his cheerful assertions that that they were indeed illusions - or self-delusions.

My understanding is that these are ways in which people try to cope with that alienation which is intrinsic to the materialism of the modern age. They (we, most likely) elaborate a parallel world, generally of a more child-like, primitive, spontaneous, immersive, unselfconscious, natural or rural kind - some inner attempted version of what Barfield terms Original Participation.

Indeed, Powys pursued this quest for Original Participation with greater and more sustained intensity than any other writer I know of. he was indeed one of the most thorough-going Romantics in history. So his many and varied books (the autobiography, the major novels, essays, philosophy, diaries and letters) give an unsurpassed, and extraordinarily detailed, account of his successes... and the limitations of his success.

Before I was a Christian, I tried (more than once) to grasp and implement Powys's ideas in my own life. But I could not make them work; and Powys himself did not really make them work (as can be seen in his diaries).

This was an important lesson: for me really to be a Romantic, I must be Christian. But/And also - to be a Christian, I must be a Romantic - in a way that includes much of the spirit that drew me to the philosophy of JCP.

Bruce Charlton
Dr Bruce G Charlton. Comments are moderated (pretty severely). If some-thing (e.g. a name) is obviously-not-being-mentioned in the post, it will not be published in the comments. Anonymous/ Unknown comments are not published, neither are topical news links. eemale is (decode) bruce dotch arltonatou tlookdotc om...